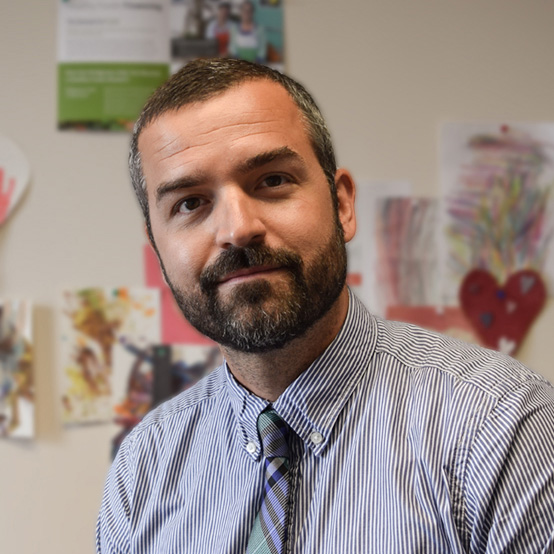 Learn more about Adam and Monmade:

Monmade is a trade group that serves craftspeople, makers, and artists — collectively called “producers” — in the Pittsburgh area who turned their trades into businesses.

Adam Kenney is the director of the Craft Business Accelerator (CBA) at the social impact investment firm Bridgeway Capital. His team coordinates Monmade’s activities. Their building a community of producers and connecting them to what he calls “key elements of business success.” “Monmade recently took six producers to NY NOW, which is one of the world’s largest wholesale products and innovative design trade shows,” recalls Kenney. “The goal there was to help these folks make connections to wholesale buyers, so they can grow their businesses in markets outside of Pittsburgh.”

It can also mean helping producers secure space of their own. Lisa Krowinski, owner of Sapling Press, a letterpress printing business, has been renting out a space in Lawrenceville for some time. She was interested in buying her own building. Monmade and Bridgeway helped her identify a building in Bloomfield to buy, and then financing the purchase. “So, within the next six months to year, what was once an empty old soap factory will become a space that houses a woman-owned enterprise,” says Kenney. “And she’s creating meaningful manufacturing jobs.”

In addition to taking on financing opportunities like with Sapling Press, Bridgeway’s 150,000 square-foot facility in Homewood at 7800 Susquehanna Street houses 4 Monmade producers and a number of other creative businesses who create goods ranging from furniture to textiles to jewelry.

For the trade group participants, Monmade holds monthly convenings, dubbed “Monmade Mixers,” where producers network, listen to presentations covering topics like the legal challenges small business ownership, and receive business guidance from individual entrepreneurs or business groups. “We’ve found that just getting these people out of a studio and into a room with other creative businesses that have just as much skin in the game as they do is really valuable benefit,” Kenney notes.

That kind of atmosphere has bred collaboration among different producers. For example, two Monmade furniture manufacturers combined their expertise for a project with Federal Galley, a food hall on Pittsburgh’s Northside, that provides space to several aspiring restaurateurs. Urban Tree handled the woodwork and Temper and Grit handled the metalwork to create the restaurant’s seating and tables.

Monmade’s community has also allowed its producers to form relationships with mentor organizations. For example, Camp Copeland, which produces home goods and accessories, has recently been accepted as part of the inaugural cohort of IncubateHER, a year-long business incubation program for early-stage female entrepreneurs run by the Center for Women’s Entrepreneurship at Chatham University.

Until recently, Kenney remarks that the “maker movement” in Pittsburgh hasn’t been regarded with much seriousness from an economic development perspective. He and Monmade have greater ambitions.

“We’re not competing with advanced manufacturing, or UPMC, or higher education,” he clarifies. “Those are the big areas, and we get it. But in between those areas, we still think there’s opportunity for innovation and impact, and that’s what Monmade’s producers demonstrate. We’ve aggregated over 100 businesses, with 55 featured on Monmade.org, who make world class products, sell globally, and hire employees as the grow.”

Learn more about Adam and Monmade: